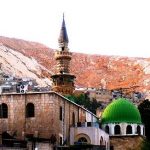 Islam was initiated by the Prophet Mohammed (peace be upon him) who lived in Mecca and then Medina from 570/571 – 632 CE. He left the Koran (recitation), Sunnah (his example) and Sahaba (his companions, who he trained). In Arabic, a Muslim is simply “one who has surrendered to God (Allah)” or “has found peace.”

The Four Rightly Guided Caliphs, who came from the Sahaba, led the Islamic world after the Prophet’s death (may peace be upon him). Most Sufi orders originate from the Caliph Ali, whilst the Naqshbandi Order originates from the Caliph Abu Bakr. Now nearly 1,400 years old, Naqshbandi knowledge has passed through a chain of 41 Shaykhs (the Naqshbandiyya Nazimiyya Golden Chain) up to our present day. In the case of the Naqshbandi Tariqat this time-honoured mystical knowledge has been passed from Shaykh to mureed – teacher to student that is, literally from “heart to heart”  – through an unbroken line of Self-Realised Masters of the Sufi Path. This is the “way of Sufism”.

← The Sufi Path to Spiritual KnowledgeSufi Mysticism and Spiritual Healing →